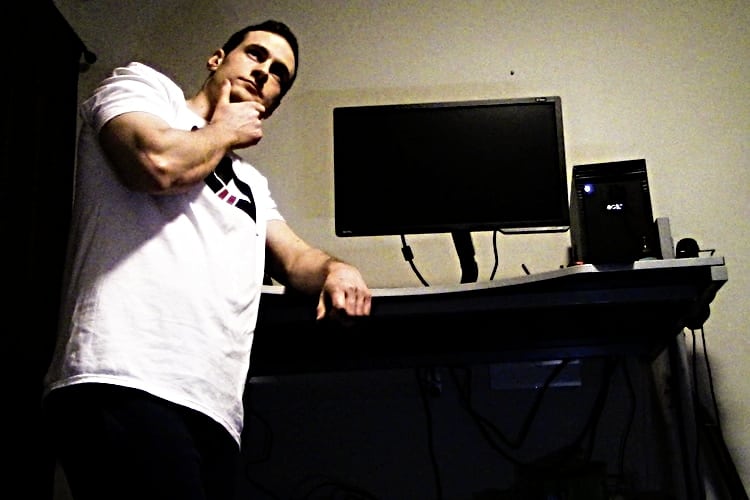 You’ve probably heard it by now, “sitting is the new smoking”. While the negative effects of sedentary lifestyles become more of a public concern, gamers will continue being scapegoated. There are tons of articles (usually from standing desk manufacturers) calling for all gamers to adopt a standing desk.

Until competitive gaming and esports utilize standing desks, practicing at one may negatively impact your gaming performance come tournament day.

As I said, a quick google search on gamers and standing desks will come up with articles proclaiming why every gamer should switch to a standing desk for their associated health benefits.

What these articles fail to recognize is the importance of consistency between practice and “game day”. If a pro esports player were to spend the majority of their practice time at a standing desk, they’re going to have a lot of adjusting to do when they sit down at their next tournament.

Let me put it this way. Imagine going to a football team and telling them all about the negative impacts their cleats have on their feet. You make them aware that they were meant to be barefoot, and wearing cleats is like putting their foot in a cast and expecting it to grow stronger.

So, this football team takes your advice. They spend all their practices barefoot. What happens come game day? They have to wear cleats, and it’s going to feel foreign and something they have to adjust too. The last thing you want in competitive gaming is something like a desk to adjust too (why not just get a new keyboard and mouse while you’re at it).

Athletes in traditional sports know they need to practice in the conditions that most closely resemble their competition. I’ve competed in adventure races (or “orienteering races”). These races require me to run long distances with a certain amount of gear. When I start up a training cycle, I always make sure to run with my full backpack as this will leave fewer surprises for my body come race day.

Here’s another example, just to “cement” my point. Let’s say all esports tournaments still used 60hz monitors. What would you spend the majority of your time practicing on? Sure, 144hz feels better for the eyes (and supposedly is better for the eyes) but anyone who has experience with 144hz will passionately declare how different they are. You would be giving yourself a huge disadvantage come tournament day when you turn on the monitor and had to adjust.

Standing desks are an adjustment. It takes a bit of getting used to. It took me several weeks to really enjoy standing while gaming. Now, when I am forced to use a chair, my body cramps up and I’m full of aches. I can’t imagine how that would affect my performance during a competitive match—adjusting to sitting again (let’s be honest, I’ll probably never know how that adjustment feels).

Yes, standing desks are a healthier option. But competing in sports isn’t about health. In fact, if you want to be healthy, don’t. People trying to be the absolute best at something are going to be pushing their bodies beyond boundaries, and gaming is no exception. So, if you’re going to be competing in gaming, train in the conditions that most resemble the actual competition day.

WHO SHOULD USE A STANDING DESK?

If you’ve read everything up to this point (thanks by the way) you might find it odd that I am a big supporter of standing desks, yet advise competitive gamers to avoid them. This is part of my “esport specific training” philosophy. Esports needs a more sport specific approach to training and less generic fitness advice.

If it were up to me, esports would utilize standing desks, and maybe they will one day. But it probably won’t happen anytime soon.

So, who should use standing desks? I would argue everyone that is sitting at a desk for prolonged periods of time. But for gamers, if you don’t compete, or don’t compete outside of your home, you may want to consider switching to a standing desk.

Prolonged periods of sitting are being linked to poor health outcomes (I discuss this more in the next section). If you have the option to stand instead of sit and don’t have to worry about attending tournaments that require you to sit, why wouldn’t you? Or why wouldn’t you at least try it out for a while?

IS THERE EVIDENCE FOR STANDING DESKS?

A question I get a lot when proclaiming the benefits of standing desks is; “but is there any evidence?”. I’m not sure if the people asking actually care about the evidence or if it’s more the case that they have already shut their mind off to the idea of standing desks.

I spent most of my time in undergrad sitting in Philosophy classes confused. As confused as I was, I understood and retained some things about arguments and logic. Just because something has been done a particular way for a particular amount of time, does not make it the “right” way to do it. In other words, just because chairs have been the norm for desks does not guarantee that desks with chairs are the best, most effective, and healthiest way to work (or game).

Ok, my rants over. Let’s look at why sitting too long is bad and why standing desks can be a great solution.

Negative effects of sitting too long

What is sitting too long? It’s sitting for over two hours continuously. When we look at the general population, things get a bit frightening. People are sitting for over 2/3 of their day, if not more. All of this sitting can increase your risks for:

That last point might seem a bit extreme to you. I’m not just making it up, the World Health Organization has stated that:

“Physical inactivity (lack of physical activity) has been identified as the fourth leading risk factor for global mortality (6% of deaths globally).”

It really is a shame that competitive gaming is done sitting as there are clear benefits for gamers and gaming performance when using a standing desk.

A surprising benefit I found when switching to a standing desk both at home and at work was that my sleep improved. Prior to standing desks, I would game at night sitting for several hours. But at the end of a day using a standing desk, I fell asleep quicker and slept deeper.

The evidence for standing desks

Don’t take my word for it. Check out over a hundred research articles compiled by getamericastanding.org. Still not convinced? I’d love to take a look at the research in support of chairs at desks and compare (Kappa).

Also, check out the book by James A. Levine, MD, “Get Up!: Why Your Chair is Killing You and What You Can Do About It”. Dr. Levine is the co-director of the Mayo Clinic/Arizona State University Obesity Solutions Initiative and the inventor of the treadmill desk.

HOW TO SET UP YOUR STANDING DESK FOR GAMING

If you’re a gamer interested in utilizing a standing desk, my post Best Standing Desks for Gamers & Esports (Complete Guide) should help narrow down some options.

WILL ESPORTS EVER INCORPORATE STANDING DESKS?

This is hard to say. The gaming chair industry will continue to grow and I suspect they would prefer to maintain their role in esports. But, as esports grows in popularity, and as the health of players become a priority, I could see pressure being put on tournament organizers to provide the healthiest environment for their competitors.

It’s certainly not going to change any time soon. So if you’re going to compete in gaming and esports, play while sitting. It may not be the healthiest, but you’re not competing in health, you’re competing to win.