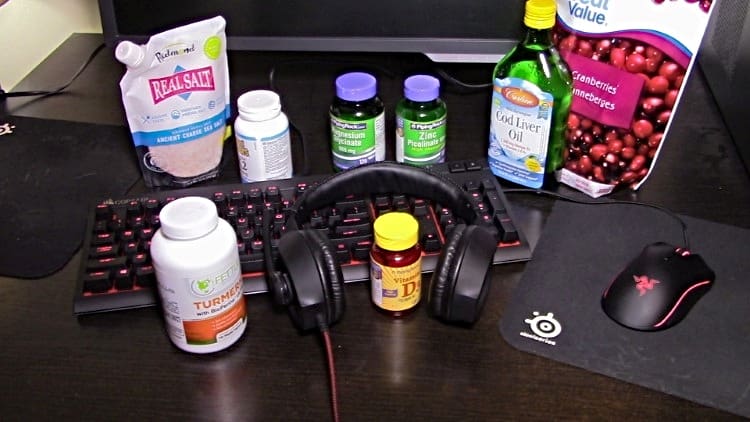 Don’t fall for the gimmicky gamer supplements that are being marketed in esports. Most supplements are garbage and most “top supplement lists for gamers” are just marketing hype trying to make a profit. Exercise, food and sleep are three of the most powerful tools for an athlete. If these three variables aren’t in check, you’re mistaken to believe a supplement will make up for it. Below are supplements that I personally use or have used. Supplements are best used to help with nutrient deficiencies. When we give our bodies and mind what they need they become capable of performing at an optimal level.

For more information on supplements and nutrition for esports, check out my posts:
Supplements for Gamers & Esports
Diet and Nutrition for Esports & Gamers.

Competitive gaming takes place indoors. Practice is indoors. Scrims are indoors. Matches are indoors. And tournaments are indoors. If you’re a serious competitive gamer, you probably don’t have enough time to be laying outside soaking up the sun on a consistent basis. I live in Canada, and as I write this post, it is -30 outside. For a good chunk of the year, I don’t even have the option to get natural vitamin D. For most supplements, I always recommend the Kirkland brand (from Costco). This brand, for supplements, is rated 5 stars by consumer reports, they’re high quality and very affordable.

TIP: vitamin D controls how calcium is absorbed into the blood, and vitamin k2 controls where calcium ends up in your body (the bones). For a more in-depth look at vitamin k2 and foods that are high in vitamin k2, check out this article by Chris Kresser.

Some of you can probably skip this section and any omega-3 supplement altogether. If you live in an area and culture that eats plenty of fish, you’re probably getting enough omega-3s. I’m in Canada, and North America as a whole is pretty deficient in omega-3s. In the United States, the majority of adults are not meeting recommendations for omega-3 fatty acid consumption. Here’s a list of some of the signs and symptoms associated with omega-3 deficiency:

These aren’t all the symptoms, but I think these ones will spike the interest of gamers. Many “gamer supplements” market their “ability” to improve fatigue, memory and cognitive function for gamers but probably fail in comparison to omega-3. I personally find 1 tablespoon the easiest way to ensure I’m getting enough, and it’s backed up by lots of studies, such as this one.

If you are training seriously, then you are sweating a lot. In fact, if you’re a competitive gamer, you probably sweat a lot during matches. When you sweat, you lose electrolytes and you lose iodine. Iodine powerfully stimulates thyroid function and improves the immune system by ridding toxins from the body such as fluoride, chlorine and Bromide. Iodine is necessary for the normal growth and development of the brain and body. Iodine is needed for the body to produce thyroid hormones, which regulate metabolism. Have you ever felt like no matter how hard you try you can’t lose weight? Making sure you are getting enough iodine can be a piece to that puzzle. Or have you still felt really tired after a full nights sleep and then continued to feel fatigued all day? An Iodine deficiency could be the culprit.

For competitive gamers especially, iodine may help improve cognition as one study found that iodine improves cognition in iodine-deficient school children and this study looks at how many parts of the brain are affected by iodine deficiency. I personally buy frozen cranberries, let about 1 cup thaw and then blend them in a little bit of orange juice and water. In Canada, this has been the most cost effective solution I’ve found so far since most cranberry juices here contain small amounts of actual cranberry juice. I recommend this blender if you’ve got the extra cash as you’ll be able to make some seriously nutrient-dense smoothies with it (ya, it’s a little pricey, but some of you spent more on a keyboard, and I bet the blender will last longer).

Here’s another supplement that’s probably not on your radar but should be. I like to think of curcumin as a “natural ibuprofen” with many other health benefits. Curcumin, the active ingredient in turmeric, has been found to have powerful anti-inflammatory effects and is also a strong antioxidant. Curcumin has also been linked to improved brain function and has helped with lowering the risks for different brain diseases (4; 5). Curcumin is also fat soluble, so I’ve always taken it with my tablespoon of fish oil. I’ve been taking curcumin daily for several years and have noticed a reduction in aches and pains, especially the ones associated with computer use and gaming. With the above-listed benefits (and many more you can google about), I figure it’s worth it.

ZMA= Zinc Monomethionine Aspartate, Magnesium Aspartate and Vitamin B6. You’re probably getting an adequate amount of zinc, magnesium and vitamin b6. At the very least, you’re getting enough to survive (at least I hope so). Now, this is going to sound odd but this supplement can be a great sleep aid supplement. I’ve personally found that I have deeper and more restful nights of sleep when I take it. In fact, my dreams become much more vivid when I take ZMA. Anecdotal reports on ZMA and sleep are plentiful, which is what piqued my interest in it. I believe sleep is critical for competitive gamers, and it can be one of their best tools for improving performance. You can check out more of my thoughts on sleep for competitive gamers in this post.

If you’re looking for something to improve sleep, I would recommend ZMA over any of the often harmful sleeping aid pills found in pharmacies. This is the product I use and I continue to notice positive effects on my sleep. I do want to point out, ZMA won’t necessarily help you fall asleep, but it may help you sleep deeper and longer. Don’t expect to pop this after a night of intense gaming and expect to be knocked out. You still need to practice good sleep hygiene.

I often recommend not using caffeine, which is a little hypocritical, because I drink a lot of coffee. In my defence, I’m not in the competitive scene anymore. Caffeine works great at the beginning but when you use it regularly your body and brain will attenuate to it. Basically, once you’re dependent on caffeine, you need it just to be at baseline rather than having it boost performance.

There’s also plenty of negative side effects of caffeine use, such as:

None of these sound ideal for competitive gamers. I’m not naive though, most of you reading this won’t even consider quitting caffeine (I get it). If you are going to use caffeine, trying combing it with L-theanine. L-Theanine is an amino acid extracted from the leaves of camellias sinensis and is also known as a nootropic (a cognitive enhancing drug). What I love about L-theanine is that it’s a natural anxiolytic as it naturally reduces anxiety in humans (by reducing levels of cortisol, a stress hormone). L-theanine is becoming popular to combine with caffeine as many people (myself included) report a synergistic effect.

Essentially, L-theanine helps boost the positives of caffeine and reduce the negatives of it by increasing focus, awareness, energy and mental endurance while also reducing stress. When I combine L-Theanine with caffeine, I feel a lot less jittery and anxious. Also, caffeine often makes my brain scatter in all kinds of directions, but with L-Theanine, my mind feels much more focused. In terms of dosing, aim for a 2:1 ration. That is, take twice as much L-Theanine as caffeine. So, if you drink a lot of coffee or energy drinks, you probably need two-three of this L-Theanine capsules. TIP: L-Theanine can be a great sleep aid. Taking a higher dose of around 400-500mg before bed can help those that have anxiety preventing them from sleeping well.

Now I’m not big on supplements like this, but after hearing Joe Rogan talking about it on his podcast and seeing the amount of clinical testing/research that has been done on it, I decided to give it a try. Alpha Brain has been clinically studied nootropic that can help healthy individuals support their memory, focus and processing speed. I’m sure you’re aware by now, but memory, focus and processing speed are fundamental to esports. I want to point out that nootropics get a lot of mixed reviews. Some say they do exactly what they claim while others experience side effects like feeling jittery or nauseous. I experimented with taking it for 90 days. While I personally felt improvements in my focus, I personally didn’t feel the benefit was worth the money. But if I was trying to be competitive on a high level, I’d definitely be taking it every day and trying to get a sponsorship.

So, if you’re still in the amateur scene, I’d focus on other aspects of esport specific training before investing money into nootropics. These sorts of supplements won’t make up for being sedentary eating junk and sleeping like crap—get this stuff sorted first.

Most people don’t eat lots of healthy foods. They eat some, but not in large quantities. That double cheeseburger from McD’s isn’t exactly the best red meat source for vitamin B’s.

There are benefits from taking a B-complex vitamin even when you don’t necessarily need it. Some of these benefits may occur for individuals that take them:

B-complex is cheap and if you’re deficient in B vitamins, you’ll likely notice some sort of improvement. I’d recommend this over some “gamer brain boost extreme focus” supplement.

A lot of competitive gamers are forced to stay up late due to their scrim/match schedule and time differences between countries. If this is an ongoing situation for you, or even when it happens every so often, melatonin may help send signals to your brain that it’s time for sleep. Melatonin helps control sleep-wake cycles which are often interrupted by gaming late at night due to the mental/physical stressors and the lights emitted from monitors. I recommend trying it if you’re having troubles sticking to a sleep routine. And most melatonin pills are sublingual, meaning you put them under your tongue, I find they kick in a lot quicker that way.