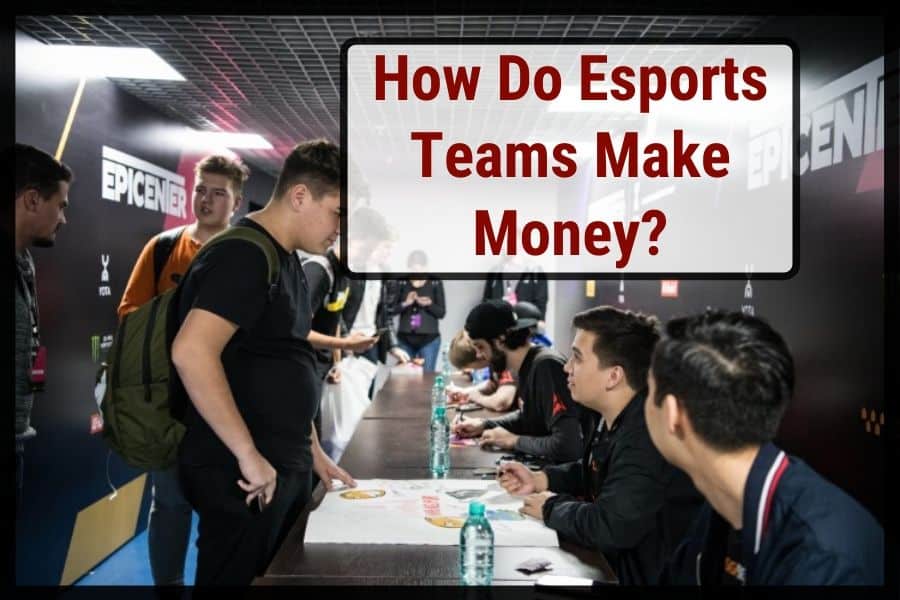 In the rest of this article, we’ll examine these sources of income and explain how each can earn money for an esports team.

The primary goal of every esports team is to earn prize money by winning competitions. Participation in competitions usually requires an entry fee and a lot of hard work practicing. However, the potential rewards are enormous.

One game alone – Dota 2 – has distributed over $200 million in total prize money over the last few years. While the majority of these winnings come from one competition (The International), even smaller Dota competitions can offer prizes of more than $100,000.

While this may sound like a lot of money for playing a few games over a weekend, you also need to think about how the funds will be spent and split:

After considering all the deductions and the actual return, many teams will realize they require additional sources of income.

As with traditional physical sports, sponsorships are an excellent way to fund the team’s operation.

Typical sponsorship packages may include:

Here’s the takeaway from this section: if you run an esports organization, you must carefully consider all sponsorship offers before accepting them. A bad sponsorship deal may leave you trapped for months or years in an agreement you no longer find favourable.

But on the flip side, a good sponsorship deal can bring in a ton of revenue or help boost your team’s visibility. So sponsorships are definitely worth taking – you just need to make sure the terms work for you.

Esports are becoming more and more popular as spectator sports. Most professional gamers stream their practice sessions and competitive matches online for others to watch. And when streaming or video creation, it is usually possible to monetize the stream or video with advertising.

The revenue you build up from this source will be directly linked to the number of people watching. For high viewing figures and associated revenue, your team needs to have a strong social media following. Team members’ personalities and likeability are just as important as their gaming skills.

Merchandising is a classic way for sports teams to make money – and it works in esports as well.

Fans love to represent their favourite teams. As such, placing your logo on T-shirts, mousepads, water bottles, and other items is an easy way to generate income.

Many websites will dropship on-demand printed merch, meaning you don’t need to invest in any upfront stock. For small teams trying to make a name for themselves, this is a great way to generate income without significant investment or risky sponsorship deal.

Esports teams can make money with event appearances, cutting ribbons at a newly opening computer shop, or being special guests at amateur competitions.

While these gigs aren’t all that glamorous, the appearance fees can provide a great source of income. Arranging this type of work is an ideal task for your team manager.

How much prize money is available?

The largest esports prize pool available in 2019 was the prize pool for the Dota 2 International Series.

The International 2019 had a total prize pool of $34 million. The top 18 teams all took a split of the winnings.

While this prize pool is jaw-droppingly huge, most events have more modest prizes. Smaller tournaments and qualifiers typically offer winnings in the tens of thousands of dollars.

What are the typical earnings of a professional esports player?

If you are deciding to join an esports team, you should expect to enter at the lower end of the market. It takes a lot of practice and publicity to work your way up to the higher leagues.

A professional player’s earnings are linked to the level they play at.

Good amateurs who are dipping their toes into the professional world may start out earning just a few hundred dollars from amateur competition prize money.

On the flip side, those at the top of their game can win hundreds of thousands to millions of dollars as their share of an international tournament top spot.

Esports teams have the potential to make significant revenue from several sources.

Prize money is the most lucrative form of income with top prizes in the 6 or 7 figure range. Even mid-ranking teams can earn enough money to keep a team of professionals gainfully employed.

While the prize money may sound a lot, the costs of running the team, travelling to tournaments, and the split between team members, drastically reduces the total earnings for individual players.

The popularity of esports will explode over the coming decade. They will most likely become as popular – if not more popular – than traditional spectator sports such as baseball and basketball.

So if you want to join this rapidly expanding world of esports, get involved now.

Hone your skills on one of the high-value games, and make sure you build a social following. These two factors combined will give you the best chance of esports success.