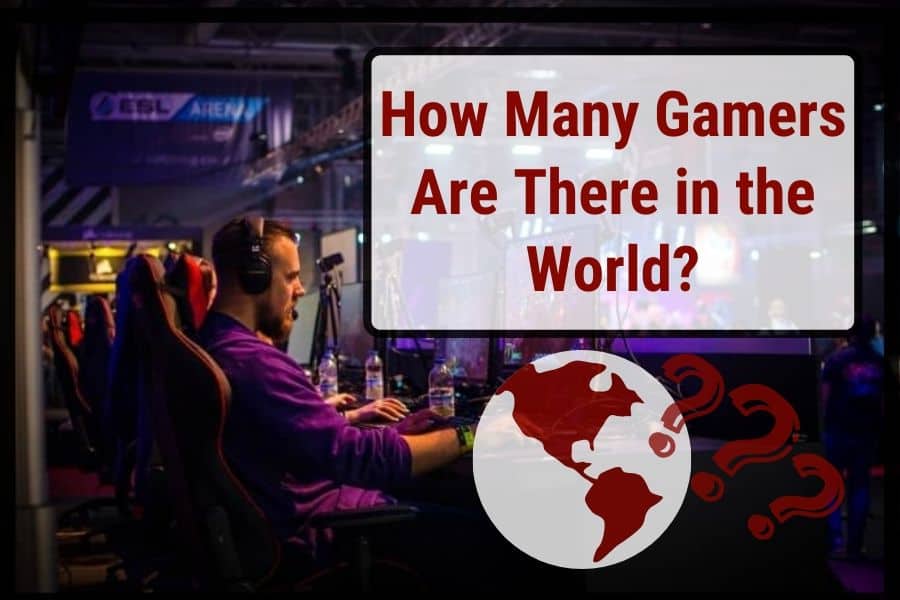 Gaming is one of the most popular hobbies on the planet. No matter which country you go to, you’ll find many people who take part in console, mobile, and PC gaming.

So, how many gamers are there in the world? According to Statista, there are currently more than 2.4 billion gamers in the world – about one-third of the world’s entire population!

To learn more about gaming habits around the world, read on.

What is a gamer?

Before we can accurately count the number of gamers worldwide, we first need to define what a gamer is.

In this context, a gamer is simply someone who plays games on an electronic device. A person doesn’t have to be particularly skilled or serious to be known as a gamer – as long as they play an electronic game regularly, they’re a gamer.

Some people take gaming more seriously, though. Over the last decade, the concept of “professional gaming” has exploded into mainstream culture and is commonly referred to as “esports”.

In my post about optimal breathing for gamers I discuss the definition provided by esports physical therapist and strength and conditioning specialist Matt Hwu:

This surge in enthusiasm for serious gaming has been driven by the widespread availability of fast broadband connections. Streaming services such as YouTube and Twitch have also allowed fan bases to develop around certain games, making it easier for professional gaming to break into the mainstream.

What platforms are people gaming on?

Gamers play on several different platforms. Here are the most common options:

Consoles have traditionally led the way as the device of choice for home gamers. Most family homes have at least one game console, and children often first get hooked on gaming using a games console.

Here are the consoles most likely to be found in your living room:

PC gaming has traditionally been seen as the hardcore gamer’s platform of choice (often referred to as “PC Master Race). Phenomenal graphics cards and the ability to upgrade your PC as new technologies develop make them ideal for playing the latest games.

Most serious competitions and tournaments make use of the PC platform. A wide range of game controllers and mice also make PC gaming the most flexible of the available platforms. Rocket league, for example, is typically played competitively on a PC but players typically utilize some sort of controller.

Just a decade ago, smartphone gaming was limited to 2D games designed with the limitations of smartphone hardware in mind. However, smartphones have quickly developed and now contain graphics and processing power almost on par with consoles.

Combined with fast and cheap mobile internet, this boost in performance has led to a massive jump in market share. Smartphone gaming, more commonly known as “mobile gaming”, is now the most popular gaming platform in the world. There’s even a competitive genre referred to as “mobile esports“.

I have to admit, it’s still weird seeing the competitors on stage gaming on their phones. Although I’m sure it’s weird for people outside of the gaming community to see massive tournaments for PC gaming.

Tablet gaming has become the platform of choice for younger children and older adults who appreciate a large screen. While the tablet market has remained pretty stable over the last 5 years, it is not considered a suitable platform for serious gamers.

The handheld market has slowly declined over the years. Nintendo has traditionally led this space, starting with the Game Boy, and currently holds first place with their newest release, the Switch.

What is a professional gamer?

Professional gamers are those who have turned their love of gaming into a job. A professional gamer’s main aim in life is to earn money for their video game skills. I wrote a whole post related to this called Should Professional Gaming be Considered a Sport, where I break down some of the sports research done on esports (you may be surprised by the physical and mental demands placed on professional gamers)

Professional gamers often get together and form teams to play team-based games with. These teams will enter competitions and tournaments, and any prize money they win is split among the members of the group.

It’s hard to say how many professional gamers there are in the world. However, even the most conservative estimates number at least a few thousand (and this number will continue growing).

Earnings from professional gaming and esports can range from minor advertising revenue earned from people watching your live stream gaming up to full-time salaried players with regular working hours, salaries, and sponsorships. For more information on this check out my post How Do Esports Teams Make Money?

How much does professional gaming contribute to the global economy?

Of this, around 50 billion is from the Asia Pacific region, 25 billion from North America, and 25 billion total from Europe, the Middle East, and Africa.

The majority of this revenue comes from licensing and sales. Although competitions, tournaments, and leagues are starting to become very popular with big prize pools, they still only contribute a small proportion to the global gaming economy. This amount should grow significantly over the next 2-3 years, though.

What gender are most gamers?

Most people believe the majority of gamers are male.

While this is true, the split isn’t as wide as you might think. According to Statista, women make up 46% of all gamers in the United States.

However, when it comes to professional gamers, the gap is enormous. Esports are the almost exclusive realm of men; very few women have broken into the highest levels of professional gaming. I hope more females make it into top level esports because I love watching compilations like this one:

What age are most gamers?

Age, however, has less to do with losing skills as it does with an increase in responsibility. It’s difficult for a gamer in their 30s to dedicate the required time necessary for pursuing a professional career. A teenage gamer, however, has much more free time and far fewer responsibilities in their life (well, typically speaking).

Which countries have the most professional gamers?

The top five countries for esports participation are:

How many viewers regularly watch esports?

Current estimates suggest that by 2020, around 70 million people will watch at least one esports final.

These estimates place esports on par with the likes of baseball and basketball.

The combination of streaming services like Twitch, Ultra HD support on YouTube, and blazing fast internet connections has made esports streaming accessible to all. Esports tournament organizers are also very adept at promoting their matches, so prepare to see more esports shown on TV and given widespread media coverage.

This number will continue to rise for all sorts of reasons. One, varsity esports is growing at an incredibly fast rate. I wrote a post all about Esports Scholarships (click to open new tab). There’s also the factor of newer generations that are more gaming orientated to grow up and become the primary consumers of entertainment.

The future of gaming and esports

There’s no doubt about it; esports are here to stay.

Popularity for both playing and watching esports is continuously increasing, and even small nations like South Korea and Sweden are showing how gaming is going mainstream.

On top of this, the constantly increasing performance of mobile devices is making top games accessible to everyone with a decent smartphone.

Over the next few decades (or even less), esports will likely have overtaken traditional physical sports in both playing and watching.

More than 2.4 billion people like to play games on their phone, tablet, console, or PC. However, only a few thousand elite players are currently turning their hobby into a full-time job. That’s not to say, however, that many other gamers aren’t making a decent living (or side hustle) from gaming.

Gaming and esports will likely continue to rise in popularity. And as they do, the number of gamers around the world will undoubtedly grow with it.