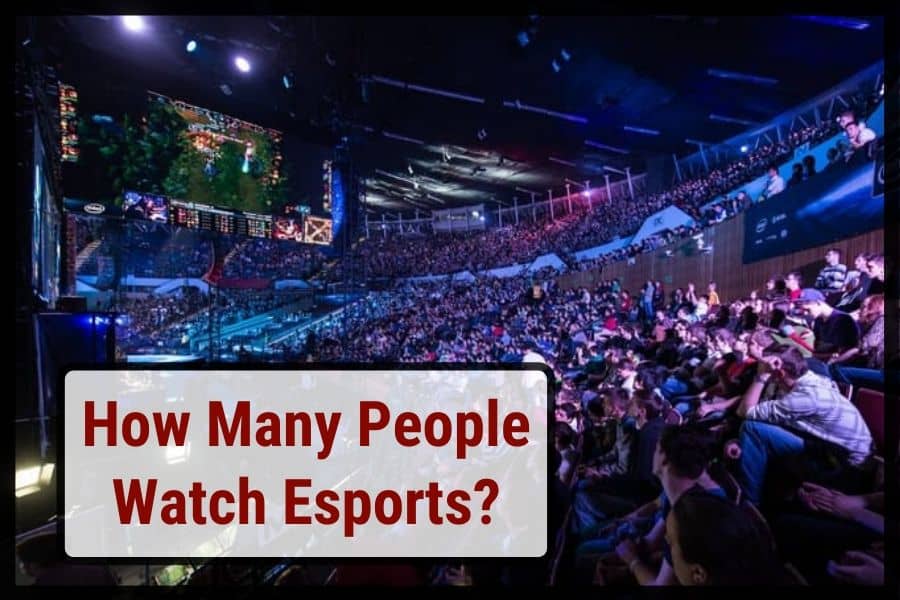 Esports is already a wildly popular form of entertainment, and it will likely only grow as many of the world’s 2.4 billion gamers start watching competitive gaming events.

So, how many people watch esports? In 2019 it is estimated that close to 1 billion viewers have watched an esports event. And in recent polls, close to 22% of internet users admitted to watching at least one esports event.

The public is clearly warming up to esports as a mainstream form of entertainment. For more information about the rising popularity of esports, read on.

Rates of esports viewing are higher in Asia than in other parts of the world. In China, 40% of internet users have recently watched an esports tournament.

Which countries have the biggest esports followings?

With a global average of 22%, the United States is a long way down the list in 37th place, with just 6% of internet users having watched a tournament recently.

Which games are the most entertaining to watch?

Many esports viewers prefer to watch the games they play and know themselves. Casual observers who don’t play games themselves might look for games with good entertainment value and high-quality graphics.

Here are some of the most popular esports games as of 2019:

In my post How Many Gamers are there in the World I discuss the rise of mobile esports. I have to admit, I don’t really follow the mobile esports scene but it’s fascinating to see how much it’s grown in a relatively short period of time.

Anyways, expect to see some mobile esports titles moving their way up the overall viewer ranks for esports overall.

In 2019, the most popular tournaments in the western world included the following:

Asian tournaments are likely to have exceeded these statistics, as China alone has more than 1.38 billion people. However, Chinese competitions typically do not publish viewing figures.

According to this data, the League of Legends Worlds 2019 is the largest watched tournament of all time. And with the phenomenal viewing figures already taking place with just 6% of US internet users, overall viewership is likely to explode over the coming decade.

Varsity esports, which I discuss more in depth in my post Can Esports Pay for College, may start to influence the overall viewing stats as a lot of colleges will only allow specific games. For example, it’s less common to see a varsity CS:GO team as it is to see a varsity LoL or Rocket League team.

I made a video discussing varsity esports due to the general media (as usual) getting some things wrong:

This is due to the perceive violence, public perception and college’s stricter rules around what they’re allowed to broadcast publicly. But if varsity esports continues to rise in popularity, they may have a bigger influence over what types of esports are viewed by the general public.

Where to watch esports?

There are two main places to watch esports: online and in person.

Online viewing is the most common method of observing esports — the most popular platform for watching competitive gaming is Twitch.

Twitch is a streaming platform that can show live games and streams in real-time. It’s the platform of choice for streaming major tournament because the supporting high resolutions, frame rates, and compression algorithms used on Twitch are explicitly designed for online game viewing.

As with many online platforms, the free platform is funded by advertising and sponsorship. If you wish to have ad-free viewing, you can sign up for a subscription.

YouTube Gaming is another streaming option. It has the substantial advantage of being integrated into the YouTube ecosystem. Combining gaming and vlogging into a single platform means teams and players can build strong online social followings, which can lead to increased sponsorship and ad revenues.

ESL and GINX are platforms that have the added benefit of high-quality polished commentary, discussion, and result graphics. They aim to make watching esports a similar experience to watching traditional sports on TV.

Many esports tournaments (particularly the later stages) are physically hosted in one location. This allows all the players to compete in the same room and to meet each other face-to-face.

In-person viewing also gives an excellent opportunity for interested observers to watch the event live in person. Tournaments are hosted in a wide range of venues such as arenas, shopping malls, hotels, casinos, and theme parks.

Watching esports in person can be a much more rewarding experience than watching online as you will share the occasion with the players themselves and many fellow supporters. The atmosphere at critical points in the game is something you can’t get with home viewing, which is why many fans opt to pay for tickets and travel to the events.

It’s like going to a comedy show in person compared to watching the Netflix special. You’ll likely find yourself laughing more often and for longer at the live event (even to the point of crying) when compared to at home by yourself. Live esports allows you to immerse yourself in the event which often creates a more entertaining experience. So, if you’re an esports fan and haven’t attended a live event, do it sooner rather than later.

Do I have to pay to watch esports?

Most esports are free to watch online. Advertising and sponsorship deals fund the technical costs of streaming the game, and some platforms allow you to buy a paid subscription to remove ads.

The ability to watch esports live in person will vary from tournament to tournament. Some events are free to attend and open to public viewing. These are often held in shopping malls.

Other events held in more formal venues like arenas may require tickets.

If you are interested in a particular event, find out the in-person viewing arrangements early on and order your tickets accordingly.

While the number of viewers in the US (6%) is still relatively low, this is likely to change over the next decade.

The 30-40% viewership of internet users in Asian countries of 30-40% demonstrates that US interest that can be developed far beyond its current point.

And with more and more money being pumped into esports, higher viewing figures are almost inevitable.