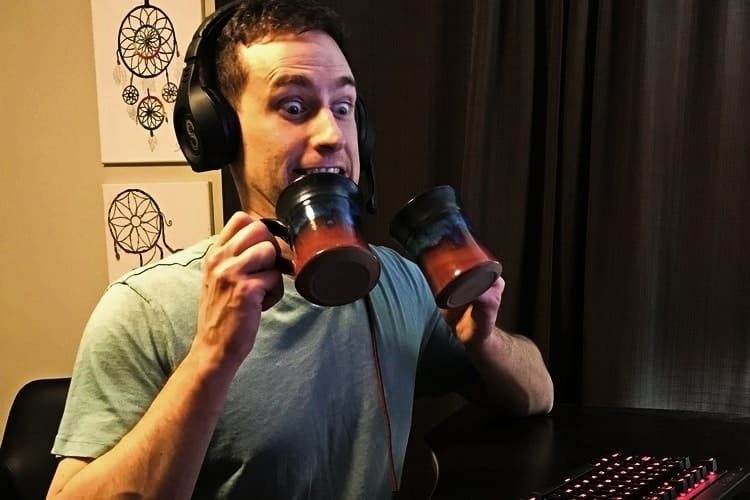 It’s sort of become a meme by now that gamers drink energy drinks or some form of caffeine. Heck, there’s the Mountain Dew League for CS:GO and Mountain Dew’s extra caffeinated gamer drinks. If you’re a gamer you’ve probably questioned, at some point, whether caffeine is actually good for your gaming.

So, should gamers use caffeine? Caffeine is known for boosting performance in athletes, but it can actually hinder performance for esports athletes. Caffeine isn’t all it’s cracked up to be, especially when you have a tolerance to it.

Caffeine is the most widely used performance enhancing and psychoactive drug. Some athletes swear by it while others consider themselves better off without it. Esports and gaming require an immense amount of focus so it’s no surprise that gamers opt for caffeine with the intention of boosting performance. There’s even gamer specific supplements hitting the markets now claiming to boost focus and reaction times.

If you’re a gamer looking for additional supplements, check out my post REAL Supplements for Gamers. I warn you though, it’s probably not what you’re expecting. Also, don’t forget to check out my post Should Gamers Use Nicotine? Vaping and Gaming.

HOW DOES CAFFEINE AFFECT THE BRAIN AND BODY

Can you guess what happens as you sleep? Adenosine slowly starts to leave the receptors on your brain causing you to feel more awake when you, well, wake up.

Caffeine is very similar to adenosine. As you start drinking caffeine, it gets into your bloodstream and then makes its way to your brain. Caffeine, because it’s so similar in structure to adenosine, competes with the adenosine receptors (and often wins). With less adenosine binding to adenosine receptors, there’s less “fatigue” felt by the brain as caffeine has taken over.

This is where long term use comes in and the addictive qualities of caffeine. Eventually, your brain starts creating more adenosine receptors (your brain really likes adenosine). With more adenosine receptors in the brain, more caffeine is required to combat with the adenosine, which explains why you build a tolerance to caffeine and require more it over time to achieve the same desired effect (this is addiction 101).

If you’ve built up a tolerance over time and try and quit caffeine, you’ll feel withdrawal effects from the overload of adenosine. This explains the “foggy” and tired feeling experienced by caffeine drinkers trying to give up caffeine.

So what about the body? Well, caffeine also stimulates the production of adrenaline (the fight or flight hormone). Once adrenaline is triggered, your heart rate increases, your blood starts pumping more and your airways open up more. Think about it, adrenaline would have been a survival mechanism for us. We would come across a bear or other life-threatening situation, our bodies would “fight or flight” and we would require more blood, a fast heart rate and an increased ability to take in air to help increase our chances of survival.

In case the last section didn’t clarify this, I’ll add a few more points as to why caffeine is addictive.

Caffeine affects the dopamine levels (that feel good chemical) in your brain as it prevents the reabsorption of dopamine, causing your brain to produce more dopamine. This is very similar to cocaine. Cocaine just causes a much bigger flood of dopamine.

CAN CAFFEINE KILL YOU?

Yes, but it’s basically impossible if you consume caffeine by way of drinking.

A lethal dose of caffeine is 150mg per kg. So whatever you weigh in kilograms, multiply that by 150. The average cup of coffee contains 150mg of caffeine so you would need to consume, on average, 60-70 cups of coffee (all at once).

All sorts of bad things like psychosis, mania and hallucinations would happen to you way before you ever reached the lethal limit.

I just want to point out, I’m talking purely about toxic caffeine intake. Drinking tons of energy drinks in a row can cause your body and organs to do all sorts of weird things and could land you in the hospital with a serious complication.

In fact, a South Carolina teenager died after drinking several different caffeinated beverages in a row. The fast intake and large amount of caffeine caused cardiac arrhythmia and he dropped dead in class (RIP).

So don’t overdo it you are a caffeine connoisseur.

SO, IS CAFFEINE GOOD BEFORE GAMING?

Despite 100 years of psychopharmacological research, the extent to which caffeine consumption benefits human functioning remains unclear.

In this study caffeine was found to increase both anxiety and jitteriness and that:

Caffeine is a drug and is similar to a lot of other drugs. What happens when you’re addicted to drugs like caffeine is that you develop a tolerance and become dependent on it. It is often argued, therefore, that caffeine is really only bringing you back to a baseline, back to the normal range that non-caffeine users are always in.

It’s like wearing a shoe that’s too tight because it feels good when you take it off. You’re simply solving a problem that you created because you experience pleasure from solving it.

Keep in mind though, not everyone responds to caffeine the same. Some people swear by it and couldn’t imagine gaming without it. That’s ok. Other people are considered “caffeine sensitive” where caffeine primarily produces negative effects like anxiety and heart palpitations.

So if you’re feeling like you’re experiencing negative effects from caffeine, it’s ok to try and quit, your gaming performance likely won’t suffer (well, maybe only for a little bit while you get it out of your system). In fact, it might actually improve.

You have to learn through trial and error. If you’re a serious competitive gamer then this should be something that you’re paying attention to. Is caffeine actually helping you? Or have you been using caffeine for so long that it is really only bringing you to baseline?

CAN CAFFEINE CAUSE ANXIETY?

Yes. Like I had mentioned, some people (more than you think) are sensitive to caffeine. If these people use caffeine they may end up experiencing all sorts of unwanted side effects like anxiety.

There’s plenty of negative side effects of caffeine use, some of which include:

I don’t know about you, but none of these sound great if you’re trying to be a competitive gamer. Unless you meticulously monitor your caffeine intake, you could be going into withdrawal right when you need caffeine the most, like during a tournament.

BUT I CAN’T QUIT CAFFEINE

Quitting caffeine can be difficult, even when you really want to. Some people have no issue and are glad to have it out of their lives, while others “kick and scream” and can never quite let it go. If you do want to quit caffeine but just can’t muster up the courage, consider the supplement L-theanine.

L-Theanine is an amino acid extracted from the leaves of camellias sinensis and is also known as a nootropic (a cognitive enhancing drug). What I love about L-theanine is that it’s a natural anxiolytic as it naturally reduces anxiety in humans (by reducing levels of cortisol, a stress hormone). L-theanine is becoming popular to combine with caffeine as many people (myself included) report a synergistic effect.

Essentially, L-theanine helps boost the positives of caffeine and reduce the negatives of it by increasing focus, awareness, energy and mental endurance while also reducing stress. When I combine L-Theanine with caffeine, I feel a lot less jittery and anxious. Also, caffeine often makes my brain scatter in all kinds of directions but with L-Theanine, my mind feels much more focused.

In terms of dosing, aim for a 2:1 ration. That is, take twice as much L-Theanine as caffeine. So, if you drink a lot of coffee or energy drinks, you probably need two-three of most L-Theanine capsules.

TIP: L-Theanine can be a great sleep aid. Taking a higher dose of around 400-500 mg before bed can help those that find it difficult to become calm and relaxed before bed.

If you’re interested, you can grab some L-theanine on Amazon by clicking here.

Ultimately, it’s up to you to discover and decide whether caffeine boosts your gaming performance. In my opinion, the negatives outweigh the benefits, so if you’re not currently using caffeine, keep it that way.

For more tips on what you can do outside of gaming to improve inside of your gaming, check out the Athletiks section. Also, don’t forget to check out my post Should Gamers Use Nicotine? Vaping and Gaming.