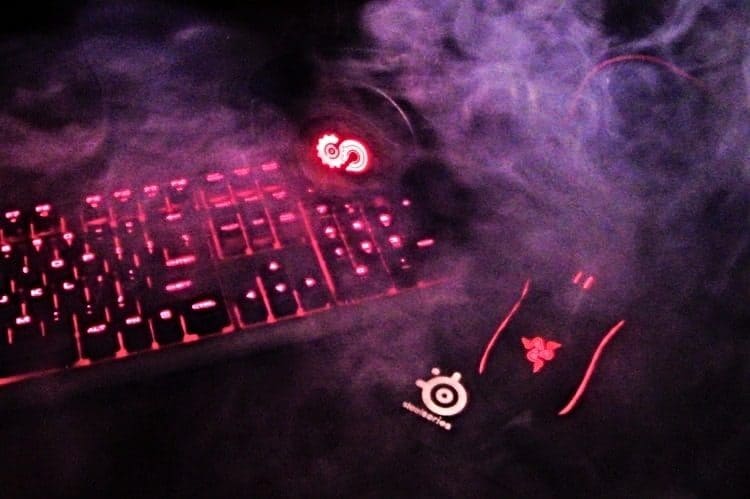 Vaping and Gaming. A niche within a niche. With vaping on the rise, gamers who were once smoking cigarettes are switching to vaping so they can have an unlimited supply of nicotine while staying in the comforts of their home. Heck, even non-smokers are picking up the vape to add a little more “pleasure” to their gaming experience.

But, should gamers, and especially competitive gamers use nicotine? Yes, there are some benefits from nicotine for gamers such as an increase in attention, focus and motor skills. But the negatives probably outweigh the benefits.

Esports and gaming require an immense amount of focus so it’s no surprise that gamers experiment with substances like nicotine with the intention of boosting performance. With the rising popularity of vaping, gamers have easy access to nicotine while gaming and may be wondering if vaping is actually helping boost their performance.

I’m going to speak about consuming nicotine by way of vaping throughout this post. But if you’re smoking cigarettes, come on, at least switch to vaping, it’s almost 2020.

Here at Cyber Athletiks, I focus on what gamers can improve upon outside of their gaming to improve inside of their gaming. I wanted to take a close look at whether nicotine can actually help boost gaming performance for competitive gamers. Cyber Athletiks is not about making a “healthy gamer”. If you want to be healthy, don’t compete. This goes for any sport. Competition isn’t a contest to see who’s the healthiest, it’s to see who’s the best. I’m trying to take a neutral look at whether nicotine can help gamers improve performance.

If you’re a gamer looking for additional supplements, check out my post REAL Supplements for Gamers. I warn you though, it’s probably not what you’re expecting. Also, don’t forget to check out my post Should Gamer’s Use Caffeine? Maybe.

Depending on where you live, nicotine may not be a legal substance for you to use. I in no way condone the underage use of nicotine. Nicotine can be very detrimental to a brain that is still developing.

HOW DOES NICOTINE AFFECT THE BRAIN AND BODY

When you inhale vapour that contains nicotine the nicotine moves from the lungs into the bloodstream and up to the brain in under ten seconds. Once nicotine hits the brain it triggers a number of chemical reactions that create feelings of pleasure. These pleasurable feelings are short-lived however, usually lasting less than a few minutes.

Additionally, when nicotine hits the brain it causes the release of adrenaline in the body (the “flight or fight” hormone). Adrenaline will increase your heart rate, blood pressure and will restrict blood flow to the heart.

Hopefully, you don’t even need to read this but yes, nicotine is addictive. When you inhale nicotine through vaping the reward circuits of the brain get a surge of endorphins causing a slight—although very brief—feeling of euphoria. Nicotine also increases the levels of dopamine in the brain’s reward circuit which will reinforce the behaviour of giving the brain more nicotine.

When nicotine use is repeated, which is really easy by way of vaping, the brain’s circuits involved in learning, stress and self-control are altered due to the increased levels of dopamine. This causes the withdrawal symptoms from stopping to seem more intense and can cause difficulties when trying to quit as the brain’s wiring has literally changed.

Nicotine hits the brain in less than ten seconds when vaping and nicotine’s effects quickly diminish causing a user to continuously use nicotine. This constant use causes the brain to rewire quickly and ensures the rewiring lasts.

CAN NICOTINE KILL YOU?

Yes, nicotine is a poison and it can kill. In a nutshell, it would take half a gram of pure nicotine to kill a human.

But what about vaping? Things get pretty complicated here and there doesn’t seem to be a definitive answer. But, roughly speaking, 40 drops (or 2ml) of 18mg e-liquid is about the same as one pack of twenty cigarettes. The JUUL pods make it a little more simple as one pod equals about a pack of cigarettes.

If you’re a vaping enthusiast, you could likely go through two or three JUUL pods in a day (especially if you’re chain vaping while gaming). But remember, this is spread out over a long period of time and nicotine’s half-life is very fast, so it’s not like nicotine is building up in your system.

You’ll let get sick and throw up before you come anywhere close to dying from vaping nicotine.

SO, IS NICOTINE GOOD BEFORE GAMING?

Yes, there are some benefits from nicotine for gamers and there is the ability for nicotine to boost performance. But please, after reading this section, read the next one on the negative effects and decide for yourself whether the pros outweigh the cons.

In a 2010 meta-analysis, researchers looked at 41 double-blind, placebo-controlled laboratory studies (a.k.a. real research). In all of these studies, nicotine was administered and was assessed in healthy adult nonsmokers or smokers who were not tobacco deprived. Here are some ways nicotine can benefit gamers and gaming performance according to the study:

The significant effects of nicotine on motor abilities, attention, and memory likely represent true performance enhancement because they are not confounded by withdrawal relief.

Nicotine does temporarily boost aspects of cognition. This can make learning new things a little easier and a little more efficient as you’ll feel a little more “sharp” in the head. This can be really handy as esports are constantly being updated and gamers must constantly be learning. Important to note though, long-term nicotine use is associated with cognitive decline.

Cigarette smoking gets a bad rep and for a very good reason. But this doesn’t mean nicotine as a drug on its own is evil. For more positive sides to nicotine check out this Harvard health article on some of the positive sides for nicotine. Some other studies around nicotine use and athletic performance have found that nicotine can improve exercise endurance and improve muscular strength.

NEGATIVE EFFECTS FROM NICOTINE FOR GAMERS

Now, before you go thinking that nicotine will boost your gaming performance with zero risks, remember what I pointed out, nicotine users are basically always in a state of withdrawal or close to being in it. When you are in withdrawal from nicotine there can be neurocognitive deficits and you can experience problems with both memory and attention. This is a big deal for gamers, especially competitive gamers. If you’re planning on competing, you won’t be allowed to vape during a match. Sure, you could switch to something like a nicotine patch or gum, but do you really want to base your life around always making sure there is nicotine in your system? Eventually, you’ll experience a time when you just can’t ensure that and performance will suffer.

Another caution I would mention is that nicotine decreases the amount of oxygen-rich blood received by the muscles in your body. This is problematic for gamers as their muscles are already experiencing a decrease in blood due to the nature of gaming being a sedentary activity and how sitting for long periods will restrict blood flow.

And the muscles that are being used the most are smaller more “fragile” muscles in the hands and wrists. I’m a big proponent of increasing blood circulation for gamers to both boost performance and to make gamers more injury resilient, so it would be hard to recommend something that does the opposite.

There is also the argument that if you are always vaping while gaming, you have “wired” your brain and gaming performance around vaping. So if you are ever unable to vape the way you normally do while practicing and playing online at home, a serious competition at an event would likely throw you off. It’s always best to train as close to the way you’ll be competing.

CAN NICOTINE CAUSE ANXIETY?

Yes. Some people (more than you think) are sensitive to nicotine. If these people use nicotine they may end up experiencing all sorts of unwanted side effects like anxiety.

I WANT TO QUIT NICOTINE BUT CAN’T

Perhaps you’ve decided that for you personally, the negatives of nicotine outweigh the positives but you are struggling to give it up. That’s ok, some people struggle with giving up certain drugs more than others. It’s best to consult a medical professional to get assistance and to create a plan for quitting nicotine.

If you’re not already exercising intensely, I recommend starting. This will help bring back a lot of positive feelings in both your mind and body while trying to stay away from nicotine.

I also recommend trying L-theanine as it has started to show some positive results for people trying to give up nicotine. L-theanine is also great for people wanting to experience more of the positives from caffeine and less of the negatives, which I discuss in my caffeine post.

Ultimately, it’s up to you to discover and decide whether nicotine boosts your gaming performance. In my opinion, the negatives outweigh the benefits and it’s always best to practice as close to the environment that you’ll be competing in. So if you’re not currently using nicotine, keep it that way.

For more tips on what you can do outside of gaming to improve inside of your gaming, check out the Athletiks section. Also, don’t forget to check out my post Should Gamer’s Use Caffeine? Maybe.

We often discuss on this site how you should prepare yourself physically for eSports and online gaming. What stance should you take when sitting, which exercises to do to improve performance and...