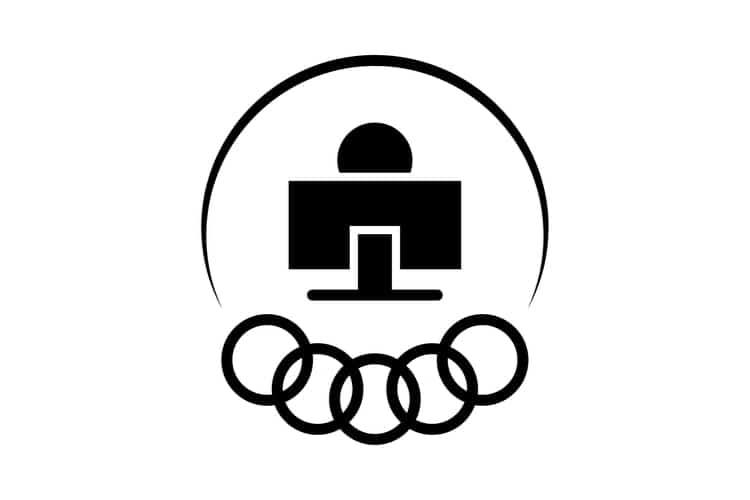 Esports are becoming more and more legitimate. Texas recently built a ten million dollar esports stadium and the 2018 LoL World Finals had nearly 100 million viewers. Even adults who don’t game are opting for twitch instead of cable TV for their entertainment.

With all of the recent growth in esports, gamers can’t help but ask, will esports will ever be in the Olympics? Esports won’t be an Olympic medal sport anytime soon, but it should be given the number of less athletic sports that are included in the Olympic Games. Esports will, however, soon be in the Olympics as a demonstration sport.

To be honest, it’s a little surreal to be writing a post on this topic. When I was a competitive gamer back in the early 00s esports was still very underground. There was no twitch, no youtube and unless you gamed competitively, nobody had a clue that esports even existed. Now we’re talking about whether esports will be in the Olympics as a medal sport.

WILL GAMING AND ESPORTS BE IN THE OLYMPICS?

The International Olympic Committee (IOC) has been discussing the possibility of introducing esports into the Olympics. This is big and this is how getting esports into the Olympics has to start. Ever since this discussion has started, there has been a lot of back and forth between different IOC members (and not to mention the media) as to whether or not esports could ever be a true Olympic medal sport.

Ever since the conversation happened, the IOC has backtracked a bit. Essentially, the IOC believes it is still premature at this time to consider the possibility of esports being in the Olympics. In December of 2018, the IOC is quoted in saying:

Some egames are not compatible with the Olympic values and therefore cooperation with them is excluded […] The industry is commercially driven, while on the other hand the sports movement is values-based […] For all these reasons, a discussion about the inclusion of esports/egames as a medal event on the Olympic program is premature.

This is understandable. Although gamers understand that violence in video games isn’t the focus of the game, the Olympics should be careful about broadcasting a CS:GO match across the globe given the political context in so many countries. In fact, titles like CS:GO are harder to find in the varsity esports scene too. Overwatch is a popular varsity esport but that’s likely due to the more cartoonish vibe it gives viewers.

The Olympic Summit of stakeholders stated, with regard to a solution for the perceived violence in video games:

The Summit encourages the International federations to explore the potential benefits and applications of the electronic and virtual versions of their sports.

So we may see the Fifa titles in the Olympics far sooner than titles like Overwatch or even LoL.

There is still talk, however, on including esports as a “demonstration sport” for the 2024 Paris Olympic Games.

WHAT ARE OLYMPIC DEMONSTRATION SPORTS?

Demonstration sports began as a way to showcase a sport or activity that was unique to the country in which the games were being held. Later, demonstration sports became more of an application, or “stepping stone”, for sports to be considered “worthy” of being in the Olympics.

Take badminton for example. Badminton was a demonstration sport during the 1972 and 1988 Olympic games. By 1992, badminton had become an official Olympic medal sport.

What does esports being considered as a demonstration sport for the Olympics mean? Well, it could mean that esports are being carefully analyzed as a potential Olympic medal sport.

Some say esports will definitely be a demonstration sport, but never a medalist sport for the Olympics. This may be true for the current time period (and the next 20-50 years). But as old generations disappear, and new generations grow up, things can really change.

In another century, we may have several generations of adults who are more interested in watching esports and the popularity may force Olympic medalist consideration.

Here’s a list of other Olympic demonstration sports over the last 100+ years:

I think it’s safe to say that esports will have its time as a demonstration sport given some of the others that have been allowed (I mean, kite flying?).

Before I go on I want to discuss this point real quick. For a more in-depth discussion on the topic, check out my post Should Professional Gaming be Considered a Sport? But here’s the tl;dr.

*this is why I created Cyber Athletiks. Professor Ingo Froböse is concerned with how terribly unprepared (both physically and mentally) gamers are whilst competing at high levels.

But at the end of the day, whenever I’m in this type of debate, I like to just state that esports are esports and we should keep it that way.

SHOULD ESPORTS EVEN BE CONSIDERED AN OLYMPIC SPORT?

This is where some of the esports and gaming community can get divided. Some gamers just want esports to be esports. They fear that getting professional gaming into a more mainstream light will negatively affect the community. If esports were in the Olympics, you’re not going to have the type of casters you have now that can make jokes, swear and talk about memes. Also, players are going to be held to a higher degree of professionalism which can take some of the fun out of gaming events.

But with that aside, a lot of people outside of esports will argue that esports don’t belong in the Olympics because it’s “just sitting still and clicking a mouse”. They argue that the players aren’t athletes and therefore don’t belong in an athletic competition. This is an understandable argument as the definition for athlete and athleticism are difficult to apply to esports athletes.

Athleticism: the physical qualities that are characteristic of athletes, such as strength, fitness, and agility.

With the above research from Professor Ingo Froböse aside, there’s the argument that the Olympics have many sports that don’t quite meet the standard definition of athlete and athleticism. Take Golf for example. There are examples of out of shape pro golfers who smoke and eat junk food while playing. And the actual movement in Golf is pretty minimal, but just like esports, this doesn’t mean the movement is easy. It can take over a decade to perfect a golf swing.

There’s also Shooting competitions at the Olympics. One of which required the competitors to stay lying down with a mounted rifle. You could argue that esports is much more of an athletic endeavour than this sport.

Here’s a list of shooting medal events for the Tokyo 2020 summer Olympics:

It does beg the question, how is shooting guns in the “spirit of Olympic values” but video games aren’t?

There’s also the equestrian events where people riding horses compete against each other. It begs the question as to why the person gets the Gold medal for winning and not the horse.

WHAT OTHER SPORTS ARE NOT IN THE OLYMPICS?

There are plenty of sports that aren’t in the Olympics that many people who are part of their community and compete in them feel should be:

If we’re talking about sports that aren’t in the Olympics but should be, many of the above examples should be included before esports ever are, that’s just good manners.

IS ESPORTS THE FASTEST GROWING SPORT?

I think it’s safe to say that in another decade or two we’ll be having a very different conversation regarding esports and how they compare to traditional sports.

HOW MANY ESPORTS FANS ARE THERE IN THE WORLD? 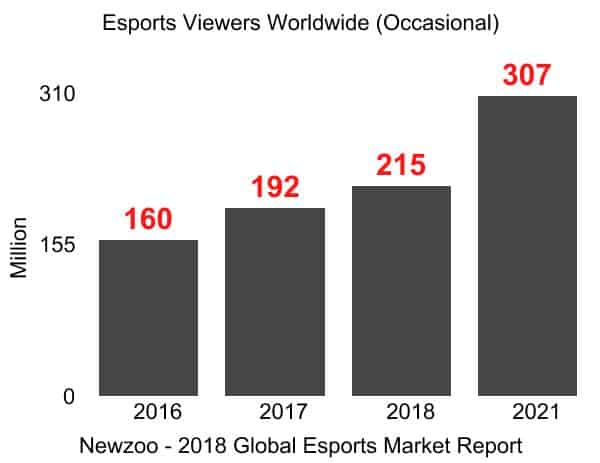 This number is going to continue increasing as more and more titles become official esports. Children are now opting to watch their favourite twitch streamer compete in Fortnite and even adults are tuning into PUBG leagues. It’s becoming more and more “acceptable” to view gaming as a form of entertainment over other forms like cable television. And let’s be honest, if we’re talking strictly entertainment value, esports offer a lot less “dead time” when compared to other sporting events.

Viewership for the Olympics Games has been declining despite the increasing ways in which people can view it. The Olympic Games will need to find other ways to appeal to newer generations. The Olympic Games could drastically change over the next 50-100 years and it wouldn’t be a big surprise to see esports included as a medal sport and potentially as one of the more popular medal sports in terms of viewership.

ARE ESPORTS BIGGER THAN SPORTS?

Activate Inc. projects that by 2020, esports will have a global fan base of almost half a billion. The only issue with these sorts of numbers is that esports covers a lot of different titles. In my post on the Top 10 Negative Effects of Gaming & Esports I discuss why this is such a big issue for players unions and the growth of esports. As esports grows, it becomes difficult to figure out the role of a governing body especially at the global level.

In terms of the total prize pools, esports is starting to take the lead when compared to other traditional sports. This data is taken from the ViasualCapitalist.com and is from 2017:

HOW MUCH IS THE ESPORTS INDUSTRY WORTH?

In 2018, esports had total revenue of $906 Million. In 2019, that number is expected to be well over a $1 Billion. Revenue from esports comes from 5 major sources and in 2018 these sources were broken down as:

Esports won’t be an Olympic medal sport anytime soon and that’s ok. If you’re a competitive gamer immersed in the esports scene, esports being in the Olympics doesn’t have much bearing on your life. Plus, do you really want to a tournament every 4 years that takes place in front of the world? It sucks losing, but that’s the ultimate loss.

For those adamant that esports belong in the Olympics then you’re probably happy to see how things are progressing. It will soon be in the Olympics as a demonstration sport and there is an ongoing discussion for whether it will be a medal sport for the Asian 2022 Games.

If you’re trying to become a pro gamer, check out my post How to be a Pro Gamer – ULTIMATE Guide where I focus primarily on what gamers can improve upon outside of their gaming to improve inside of gaming.